UNDER THE FLOWERS (Web Series) 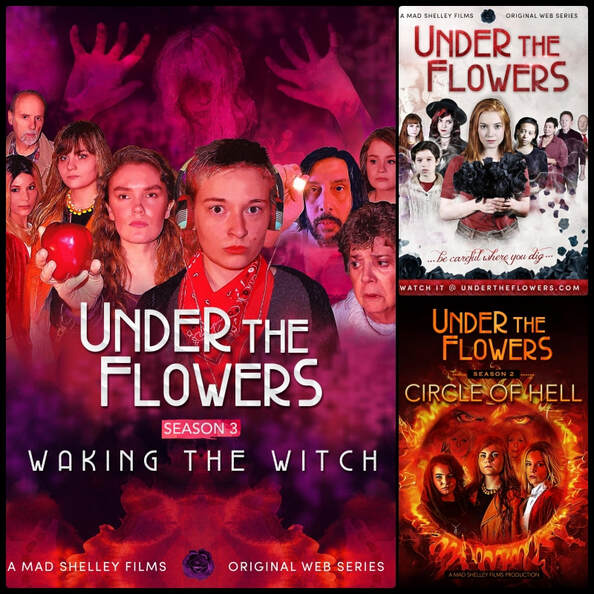 SEASON 1:  Jackie Hill has one too many nightmares - especially when she’s awake. Whether it’s the black flowers growing out of a little boy’s hand, the unnerving Goth Girl who appears just before her black outs or the strange man who visits in her ‘unconscious’ state, she regularly feels her sanity slipping away. But as one world digs in to the other, challenging her ‘reality’, Jackie knows the true answer lies somewhere…under the flowers.
SEASON 2:  The second season of the Award-Winning, supernatural web series finds Poe attempting to transform her tortured soul and move on as ‘Rose’ in a hellish odyssey set in the In-Between, led by the darkly mysterious Nerissa. Bravely facing down her many demons, Rose’s journey soon grows even darker, rapidly sending her to the outer edges of Hell, and threatening the very destruction of her soul. Will ‘The Halloween Girl’ come to her friend’s aid, or will even Charlotte find the price too high in the Circle of Hell…?
SEASON 3:  Charlotte, Rose and Jackie must battle a diabolic secret society called The Hollow for the soul of Crystal Springs - but they can’t do it alone. First, Charlotte must travel to the In-Between for help, risking her own soul…to Wake the Witch.​

Ten years after her tragic death on Halloween night, Charlotte begins to reappear to her mother, Marie, in a series of nightmares - or are they? Only adding to her distress is the news that her young son, Luke, now has a mysterious teenage friend he calls ‘The Halloween Girl’ - and her name is Charlotte. Has Charlotte really returned - and is Marie’s dark secret now in danger of being revealed…?